The Basics of Coudé Catheters

Has your doctor recommended you begin using coudé catheters? If so, you probably have some questions. For example, what exactly is a coudé tip catheter? What types of catheters have a coudé insertion tip? Are coudé catheter supplies covered by insurance? Also, why do you need to use a coudé tip?

Let’s go over some of the basics of coudé catheter supplies.

What Are Coudé Catheters?

Many different types and brands of catheters are available today, but there are typically only two insertion tip options (with the exception of some variations of the two): straight tip and coudé tip.

A coudé tip is basically a slightly angled or curved tip on a catheter. This catheter tip type is best for those with difficulty passing a regular straight tip intermittent catheter.

This situation is most common in men, so the coudé tip is almost always an option on male length catheters. The reasons for needing coudé tips may include urethral strictures, urethral blockages, an enlarged prostate (BPH), or false passages.

Your prescribing healthcare professional can determine what will work best for you, based on your anatomy and the underlying issue causing the need for a coudé.

Coudé catheters come in various options for your individual needs and preferences, such as closed system kits, hydrophilic catheters, and uncoated catheters.

The types of coudé insertion tip variations include:

This type of coudé catheter tip features a short, strong curve that is smaller at the insertion point. This is especially good for navigating through strictures or bypassing enlarged prostates.

These are just a few of the many coudé catheters with tapered tips you’ll find at 180 Medical.

This tip features a slightly ball-shaped, rounded insertion tip. It also curves to aid a smooth passage around obstructions to the bladder.

The olive tip coudé catheter may be a good option for getting past false passages that a standard tapered or Tiemann tip might catch on.

The Tiemann tip is elongated and tapered, and it’s also typically more pliable than other coudé tips.

It’s helpful for navigating narrower passages and bypassing strictures, and the pliability of the tip can aid in better comfort during catheterization. 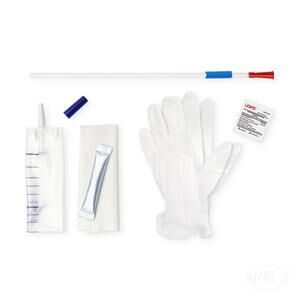 Most health insurance plans do cover intermittent urinary catheter products, including catheters with coudé tips. For example, Medicare and most Medicaid plans cover catheter supplies, and so do most private insurance plans, such as United Healthcare, Blue Cross Blue Shield, and Cigna.

However, keep in mind that in order to receive catheter supplies, you must have a valid prescription. Some insurance plans may also require additional documentation like doctor’s progress notes, for example. Others, such as certain state Medicaid plans, may require prior authorization before approval of coudé catheter coverage.

Have more questions about catheters and insurance coverage? Get answers here.

How to Insert a Coudé Catheter

Everyone’s anatomy is different, so the way to insert the curved tip of your coudé catheter will depend on your doctor’s medical opinion and instructions.

Your urologist or urology nurse will likely spend some time with you during your appointment to go over the process of learning how to insert a catheter, including the correct angle to lift your penis for catheter insertion, as well as which direction to turn the angle of the insertion tip.

Many coudé tip catheters will offer a reference point on the funnel, such as a notch or a bump to indicate the angle. Others have a guiding line down the catheter tube as well.

After you leave your doctor’s office, you might still have some questions. 180 Medical can help! Our trained specialists will be glad to help make the process of learning to use catheters on your own as easy and stress-free as possible. Just reach out and contact us or fill out a form to request free samples and get started!
For help learning how to use coude catheters, check out the helpful instructions at www.howtocath.com.

Finding the Right Catheters For You

At 180 Medical, you can choose from the widest selection of catheters, available from the best manufacturers on the market today, including Convatec GentleCath, Bard, Coloplast, Cure, Hollister, Rusch, LoFric, and more!

Contact us today! Our friendly specialists are ready to help you find the best catheter for you!

Jessica is the Sr. Marketing Specialist at 180 Medical, where she's worked for 13 years. Her favorite part of her job is getting to be creative and seeing the positive impact we can make on our customers' lives.

Outside of work, you can find her hanging out at home with her husband and their dogs or browsing garden centers where she will almost certainly buy another houseplant she doesn't really need.

Have you recently been told you need to use coudé catheters and need some more information? Find out more about the coudé insertion tip in our latest blog.

14 Dos and Don’ts of Self-Cathing

Are you new to using self catheters? 180 Medical has some helpful tips to get you started on the right track.

Most Common Mistakes When New to Catheter Usage: Top 5

Are you new to using catheters? If so, you probably…