180 Medical Blog / Catheter Resources / Why Do I Need to Use Coudé Catheters?

Doctors may prescribe intermittent catheterization to help drain the bladder due to issues like urinary incontinence, bladder retention, incomplete bladder emptying, or neurogenic bladder. While most people find that straight tip catheters suit their needs, not everyone can easily insert straight catheters. This may lead to a need for a curved tip or coudé tip catheter. If you’re one of those people that have difficulty inserting straight catheters, you might wonder, “Do I need to use coudé catheters?”

What’s the Difference Between Straight and Coudé Catheter Tips?

A urinary catheter is a thin, flexible tube that is inserted into the bladder through the urethral opening or a stoma (typically somewhere on the abdomen or in the navel for a Mitrofanoff). One end typically features a funnel end, which is sometimes color-coded to indicate the catheter’s French size (diameter).

The other end is the tip that gets inserted to drain the bladder. It will feature at least one eyelet or drainage hole for the urine to flow during intermittent catheterization. Urine then travels down the tube and outside the body.

What is a Coude Catheter?

Sometimes known as a coude or curved tip catheter, a coudé tip catheter (pronounced “coo-day”) has a slight bend or curve at the insertion tip. This angled insertion tip can navigate past difficult urethral passages for many reasons, including false passages, obstructions, strictures in the urethra, and more.

Next, let’s address some of the most common causes of needing to use coudé catheters.

The standard type of catheter features a straight insertion tip. These are the most common type of catheter tips since they work universally for draining the bladder through the urethra or a stoma.

Factors That May Cause the Need to Use a Coudé Tip Catheter:

In cases where someone has difficulty inserting a straight catheter or experiences unusual pain trying to catheterize, a coudé tip catheter may be a possible solution.

Who Typically Needs to Use a Coudé Catheter?

The majority of coudé catheter users are men and boys, which is why most coudé catheters are male length (16 inches) or pediatric length (10 inches).

However, doctors may prescribe coudé catheters for any gender when a straight catheter does not easily pass. It all depends upon your individual physiology and needs.

Are There Different Types of Coudé Insertion Tips?

Yes! While most coudé catheters feature a gentle tapered curve, others may have a ball-like tip. This is known as an olive tip coudé catheter. Some catheter users may need a more elongated curve like a Tiemann tip catheter.

Here are the three types of coudé catheter insertion tips. 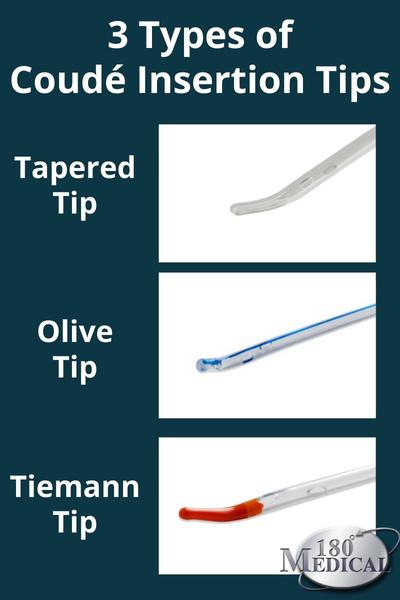 The most common coudé catheter type has a tapered tip. You’ll see a short, strong curve that tapers smaller at the foremost insertion point.

Catheters with a taper tip curve may be ideal for navigating urethral strictures or bypassing enlarged prostates.

This type of coudé tip catheter features a ball-shaped insertion tip. Olive tip catheters, although a rarer option, may work well for people with false urethral passages, which longer insertion tips may catch on.

Tiemann tip catheters have an elongated, tapered curve. This type is often more flexible than other coudé tips as well. Due to its longer curve, the Tiemann tip catheter can be ideal for getting through narrow passages and strictures. Plus, it may provide more comfort for some users thanks to its pliability.

What Types of Coudé Catheters Are Available at 180 Medical?

Coudé catheters are manufactured in all catheter materials, including vinyl or PVC, silicone, and red rubber latex, to name a few. Plus, you can find latex-free or DEHP-free coudé catheter options too. 180 Medical offers a vast selection of options from which to choose. Your comfort and convenience are important when determining which catheter to use. That’s why we offer free coudé catheter samples so you can try and find which one works and feels best for you!

If you’re looking for a no-nonsense coudé catheter option to lubricate yourself, an uncoated coudé tip catheter may be your best bet.

Hydrophilic coudé catheters have a specialized coating that reacts with water to completely lubricate the catheter and make it slippery. No need for additional lubrication! The lubricated coating will not slough off as you insert it, which makes cathing more comfortable and frictionless.

Closed system catheters with coudé tips are great options for those in wheelchairs or on the go. Each closed system features a hydrophilic or pre-lubricated coudé catheter housed inside its own self-contained collection bag. Closed system coudé catheters offer you more convenience, discretion, and comfort, as well as an added benefit of a reduced risk of urinary tract infections.

Can I Change My Supply Order from Straight to Coudé Catheters?

If you suspect you need a coudé tip catheter, the first step is to talk to your urologist or other prescribing healthcare professional.

The decision will ultimately be up to your urologist or qualified healthcare professional. Then they will need to update your prescription to include the need for coudé catheters (A4352).

Some insurance plans, such as Medicare, may require additional justification in doctor’s notes.

180 Medical’s insurance experts can take that extra step off your plate by getting any required documentation from your prescribing healthcare provider (HCP).

Most insurance companies that pay for catheters will cover coudé catheters. That includes Medicare, private insurance plans, and many state Medicaid programs. The type and allowable amount per month will depend upon your insurance policy’s specified coverage.

For example, Medicare covers up to 200 catheters per month with a doctor’s prescription. Coudé catheter coverage requires some supporting documentation offering justification for the need for a coudé tip. That’s enough catheters to sterilely self-cath between 6 and 7 times daily within a 30-day period.

Not sure what your insurance policy’s catheter coverage is? 180 Medical’s specialists will gladly verify your insurance to determine how your policy covers catheters. Plus, we go over any out-of-pocket costs you may have. We also work with your doctor’s office to get any insurance-required documentation.

That’s less for you to worry about as you learn how to use a coudé catheter.

How Do I Use a Coudé Catheter?

Where to Get Home-Delivered Coudé Catheters

180 Medical’s catheter experts will work hard to find the right supplies for you and your individual needs and preferences.

With your first order, we can also send you full-color instructional brochures and even a DVD that walks you through the catheterization process step by step.

180 Medical proudly carries one of the largest selections of catheter supplies available today from all of the major manufacturers and catheter brands.

Contact us to speak with one of our highly-trained, friendly specialists about your coudé catheter options.

Jessica is the Sr. Marketing Specialist at 180 Medical, where she's worked for 13 years. Her favorite part of her job is getting to be creative and seeing the positive impact we can make on our customers' lives.

Outside of work, you can find her hanging out at home with her husband and their dogs or browsing garden centers where she will almost certainly buy another houseplant she doesn't really need.

The Basics of Coudé Catheters

Do you have difficulty using straight catheters? There is another option that may be right for you. Learn more about coude catheters here.

14 Dos and Don’ts of Self-Cathing

Are you new to using self catheters? 180 Medical has some helpful tips to get you started on the right track.

Most Common Mistakes When New to Catheter Usage: Top 5

Are you new to using catheters? If so, you probably…